Gesture mimicry in expression of laughter

Mimicry and laughter are two social signals displaying affiliation among people. To date, however, their relationship remains uninvestigated and relatively unexploited in designing the behaviour of robots and virtual characters. This paper presents an experiment aimed at examining how laughter and mimicry are related. The hypothesis is that hand movements a person produces during a laughter episode are mimicked through equivalent or other hand movements other participants in the interaction produce when they laugh. To investigate this, we analysed mimicry at two levels of specificity during laughter and non-laughter periods in a playful triadic social interaction. Changes in mimicry rates over the whole interaction were analysed as well as possible leader-follower relationships. Results show that hand movement rates were varied and strongly dependent on group. Even though hand movement are more frequent during laughter, mimicry does not increase. Mimicry levels, however, increase over the course of a session indicating that familiarity and comfort may increase emotional contagion. 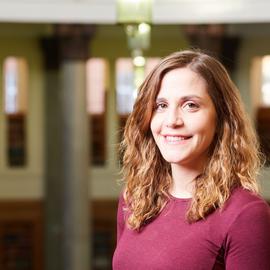